This article written by the ViSenze team originally appeared on e27.

The figures are clear and disconcerting


A study was done in 2014 based on LinkedIn data to see what percentage of women work in software engineering across industries. Whatever industry you look at, the number of female engineers is bleak. 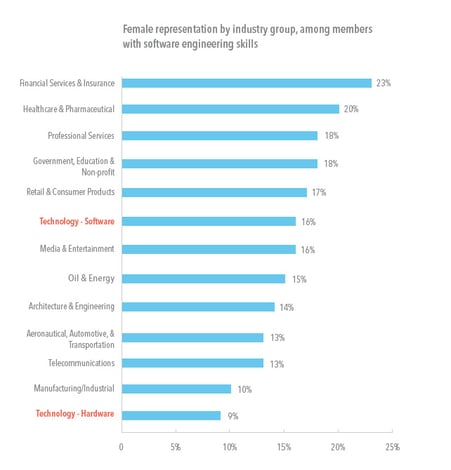 Even in the field that can boast the highest number of female software engineers, Financial Services and Insurance, a sobering 23% of them are female. The numbers for high tech software and hardware companies are especially troubling - only 16% and 9% respectively of their software engineers are female.

Although women have made great strides in formerly male-dominated professions in the last few decades, software engineering remains one of the occupations where females are severely underrepresented.

To explore and shed on light on this topic, we sat down with a number of software engineers in our team (both male and female), dug deep and asked about their experiences in working in such a male-dominated industry.

Motivations behind their chosen profession

“I’ve always been interested in coding because it's an activity that can make your ideas come true - if you can dream it, you can code it. Programming is also a useful skill to have, it’s easy for you to find a job with expertise in this field. In fact, my father, who was an engineer himself, thought so. And his viewpoint influenced my decision to be a software engineer.” says Huifan, a female engineer at ViSenze.

Her choice stemmed from very pragmatic reasons - gaining engineering knowledge and background in school provides job security in the future.

On the other hand, Yulu, another female engineer in the team, revels in programming and writing code, adding that the global software engineering community has been supportive in her efforts and propelled her in her pursuits.

“I used to write about my projects (and even open source them) on my personal tech blog, and received feedback from other developers all around the world. It was very inspiring to garner such support and interest from the community.”

Why is the gender divide still so wide in software engineering?

The reasons suggested for the gender imbalance in engineering are very much related to gender stereotypes. The stereotype - deeply-seated in most cultures - that links masculinity to technology is, unfortunately, still prevalent and difficult to overcome. 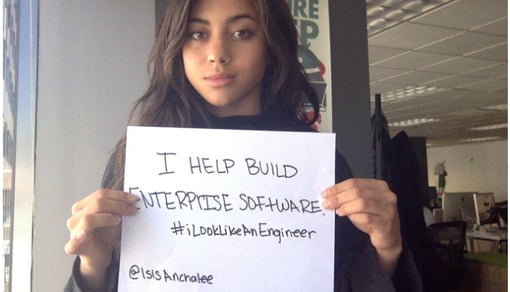 After a photo of software engineer Isis Anchalee appeared on a recruiting ad for her employer OneLogin, she received numerous sexist comments online about female engineers. So the 22-year-old wrote a blog post to highlight the issues women in tech face. She said that most people in the industry are well intentioned “but genuinely blind to a lot of crap that those who do not identify as male have to deal with.”

Perceptions of engineering as a male domain may be one factor, and the misconception that engineering - even software engineering - involves tedious labor (such as working long hours) is another.

“It is often conceived that software engineers need to undertake heavy workloads, meaning we’d need to work long hours late into the night, and most females don’t enjoy having this lack of work-life balance. Many of my female engineering schoolmates didn’t choose the engineering profession after graduation, and they cited that as the case,” says Huifan.

The truth on female engineers and their capabilities

In terms of skills, women do not lack in engineering abilities. In fact, female engineers tend to be as good, or even better than male engineers. To start with, Ada Lovelace, a British mathematician and writer, is often regarded as the first computer programmer - having written notes on codes, theorized methods, and offered forward-thinking concepts in the field.

However, though women are not worse off than men in terms of computing skills, more women enter engineering programs than finish (the same is true of men, though not at quite the same rate). Even women who graduate from engineering schools frequently discontinue working in the profession, often citing overt or covert sexism and patronizing attitudes from male colleagues and bosses. 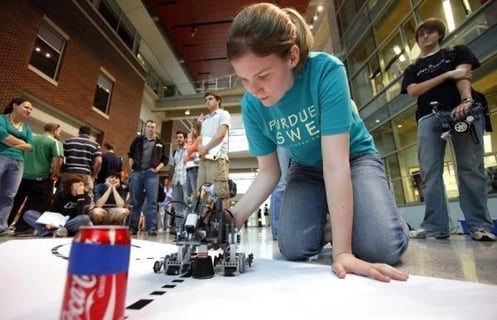 “It’s true, many of my fellow female engineering students chose to go into other professions upon graduation, such as HR-related and consulting roles, where the gender gap is not so wide”, says Huifan.

And she’s not alone in that. Researchers at Stanford University recently published new findings that women engineering students perform as well as men, but are more likely than men to switch to a different major. These women switch because they don’t believe that their skills are good enough and they don’t feel like they fit in engineering.

Professor Chua Tat-Seng, Chief Scientist and Co-Founder at ViSenze, and also currently the KITHCT Chair Professor at the School of Computing, National University of Singapore, offers some insight on this topic -

“I think it is more the upbringing that makes the difference, rather than the inherent capabilities of being males of females. In that sense, males are brought up to think that it is cool to be able to solve deep technical and engineering problems, and cool to spend hours buried in a room to find technical solutions; whereas females are brought up more to leverage on their soft skills which tend to highlight more of their feminine side of characters. Hence, while it is common to see make hackers (someone who enjoys hacking into the codes of programs), female hackers are rare.”

So while differences in capabilities is not the reason for this gender divide, stereotypes regarding women’s innate technical incompetency and the upbringing that follows, is. Due to these unfounded stereotypes, women have been actively discouraged from going after careers in technical fields.

Nelly Yusupova, the CTO of Webgrrls International, had this to say, which seems to be right in line with this point:

“I believe the problems start in a girl's early teen years when they are most influenced and I think it comes down to not having enough positive role models, negative pop culture imagery, and not having access to mentors. Most actually grow up with a negative stereotype about the technology industry and being a geek. They tend to imagine that, computer professionals and those who work heavily in IT live in a solitary and antisocial worlds, which is not a very appealing image for a young girl growing up.”

What needs to change

Katy Huff, a nuclear engineer at the University of California, Berkeley, acknowledges that the engineering workplaces poses an extra hurdle. But she’s not convinced that the problem can be solved by engineers themselves. “Societal norms at large, not only the societal norms of the engineering research workplace, must change.”

In short, all of us need to acknowledge that being interested in science and engineering is not a male quality.

This is especially important now, because we cannot afford to lose anyone with the technical skills and capabilities, intelligence, creativity, and values to solve problems and create a sustainable future. 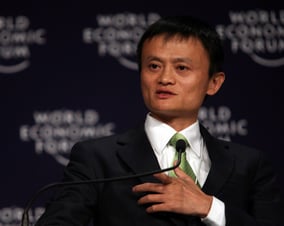 Jack Ma, CEO and Founder of Alibaba Group, addressed the importance of females in engineering roles during his keynote speech on a CCTV program filmed in England last year:

“Actually I think one of our important secrets is that we have a lot of women. The fact bear out that we’ve got the highest percentage of women on staff at any major tech company. Of our 18 founders, more than one-third are women. I think it’s only right that the amount of men and women be roughly equal, only then will everyone will comfortable and innovation happen.”

Clearly our current technological revolution is an opening of humanity’s intellect, it’s about tech data and an opening of the brain. And in terms of technology, intellect, and consciousness, men and women are equal.

“There are definitely more females in Computer Science now. In the past, people view Computer Science as doing programming and backrooms work, that demand 24-hour standby, and this is deemed unsuitable to females. This image has been changing gradually given many high profile venture startup cases. Computer Science is now the top discipline of choice given its huge potential and versatility, in terms of career and entrepreneurship options”, says Prof Chua.

For female software engineers and computer science students, the trick is not to let these stereotypes distract you. Be prepared to go deep into technical depth when necessary and at the same time, leverage your strength in soft skills to perform will in this male-dominated industry.

“Rather than think of engineering capabilities as gender-related, it is more person-related. I know excellent female CTO and tech leaders who are even sharper than their male counterparts. So there is no doubt that female engineers can do an excellent job in the tech industry,” says Guangda Li, CTO and Co-Founder at ViSenze.

Yulu, though aware of the gender disparity in the industry before entering, did not let that bother her. “Just follow your heart, choose what you like to do, do what you’re good at, don’t think too much and ignore the numbers and statistics on this disparity. Most importantly of all, believe in yourself.”